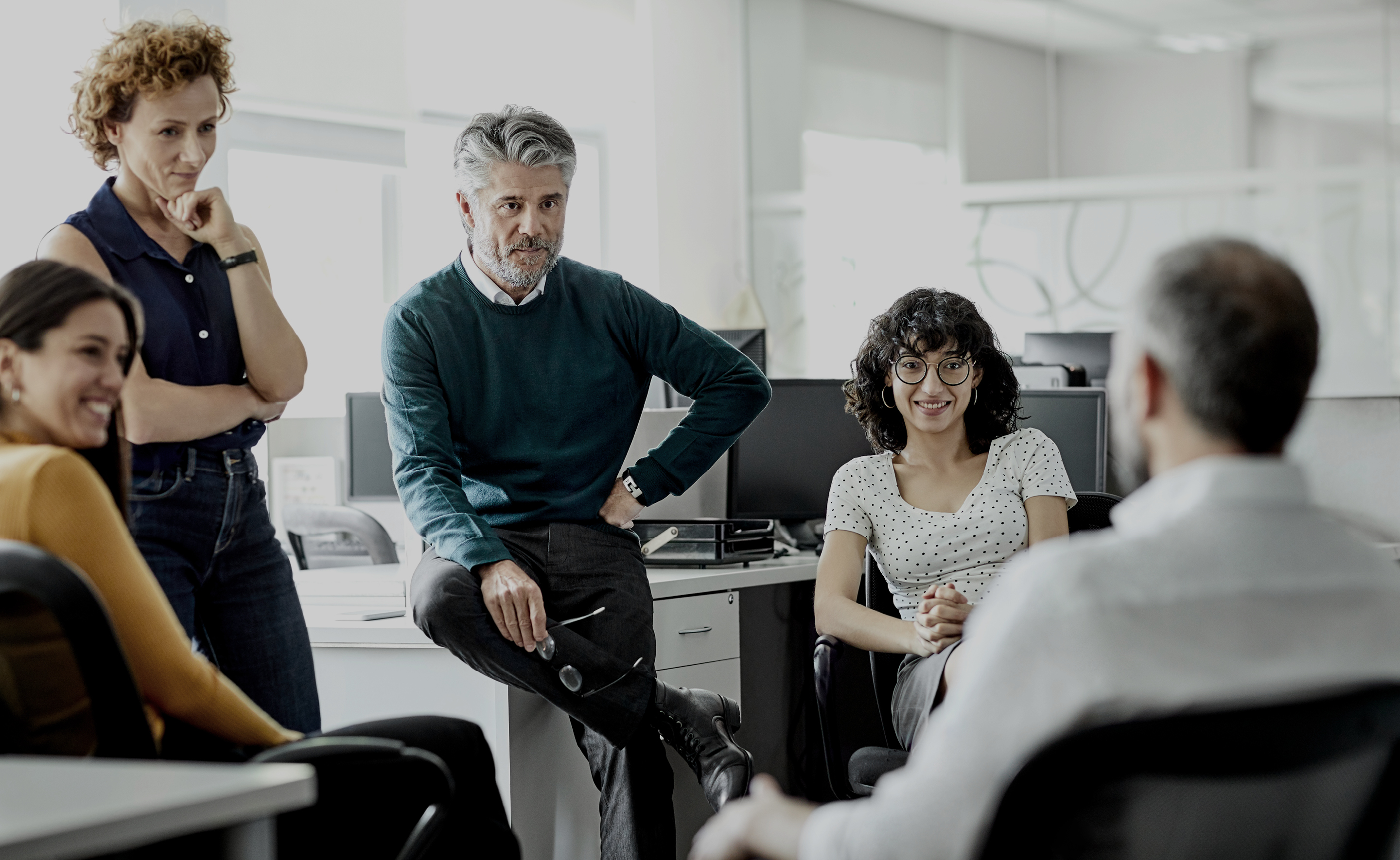 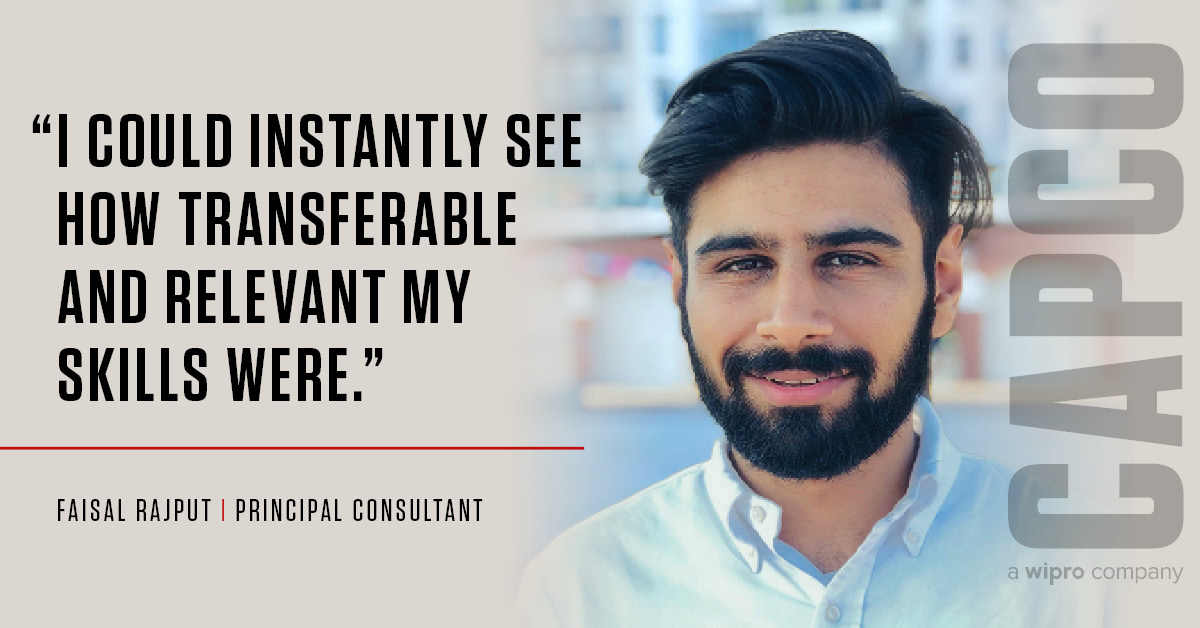 Having come from a construction project management background, I had built up great experience of delivering complex infrastructure, property, and aviation projects. My grounding in programme and project management gave me a solid toolkit and taught me what it meant to be effective in delivery. I enjoyed my work, had incredible colleagues but was discouraged by the lack of technological innovation at the time and had a growing desire to deliver business change, rather than solitary projects. It soon became evident that working to execute on strategy within a future forward organisation was what I was after. I figured I would have to lofaiwer my expectations, but then, as if by magic, Capco reached out.

The thought of moving into a complex new Industry was initially quite daunting but my first conversations with the recruitment team were clear, they walked me through the type of work Capco delivered, setup 1:1s with other similar hires and made it known that my programme management experience was highly sought after.

After a weeklong consulting and Capco induction I landed on a project. I could instantly see how transferrable and relevant my skills were. Of course, there were gaps, but a combination of ‘on the job’ and structured classroom training programmes quickly built up my domain knowledge. I learned the most by working with a group of sharp, energetic, and thoughtful people who weren’t afraid to roll up their sleeves to solve business problems. On every project at Capco there has consistently been a collegiate atmosphere which I believe allows people to feel safe enough to challenge the way things are done and generate inventive solutions.

Over the past five years at Capco I’ve worked to deliver global projects in Capital Markets, Commercial Banking, Wealth and Payments. Across each engagement I’ve worked in teams to drive technology change, define organisational strategy, and develop new product propositions. This breath of work I’ve been exposed to is testament to how vibrant the opportunities at Capco are. 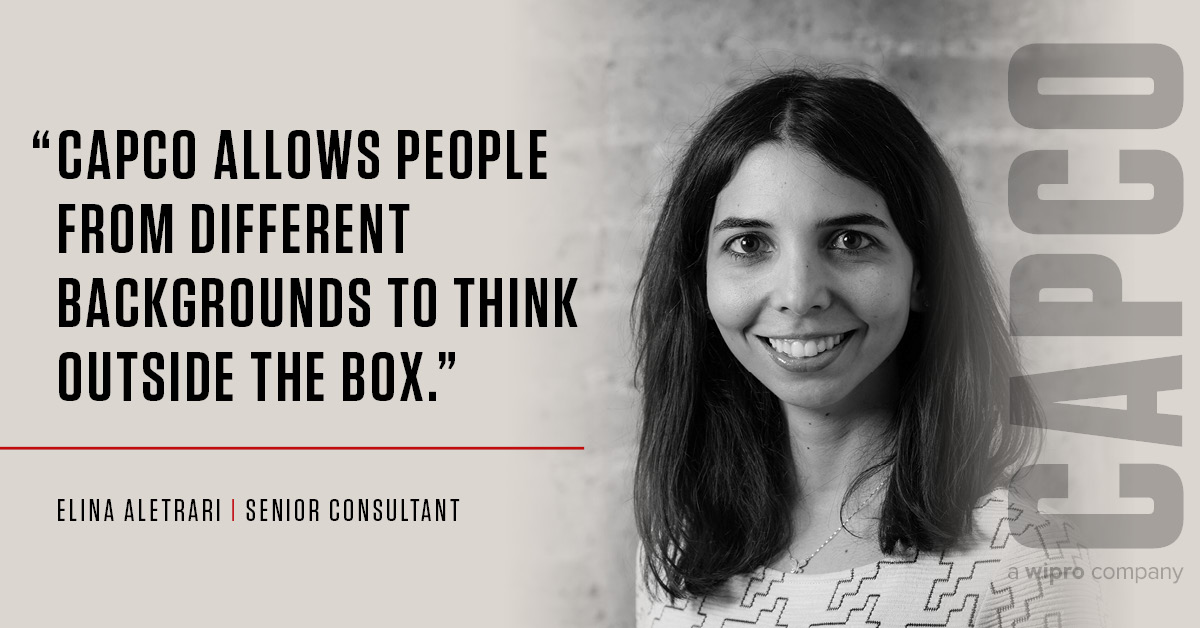 From a young age, whenever someone asked me what I wanted to be when I grew up, I would always reply “a scientist”. My role models were Marie Curie, Mary Anning, Jane Goodall, Rosalind Franklin and David Attenborough. I wanted to become a conservationist, a person who advocates for the protection of the environment and wildlife. And I did! I received my PhD in Biogeography, conducted fieldwork around the world and ended up working at one of the best research institutions of the world, the Natural History Museum in London.

I was introduced to the idea of switching careers and moving to consulting and the financial sector by fellow scientists who had already joined Capco. The company was described to me as a global management consultancy with a collaborative and highly energetic environment that welcomes and supports everyone who joins the Capco family. A place which allows people from different backgrounds to think outside the box and use their skillsets and experiences to solve some of the most challenging business and technology problems in the marketplace today.

I joined Capco in September 2016 and completed an initial training before being assigned to a client project. The training introduced me to business concepts and skills to prepare me for a consulting career, but also provided me with a foundational understanding of the financial services industry. Through the initial training but also through specialised courses that Capco offers, I was immediately more confident in using my abilities within the new environment in which I found myself.

I was then given the opportunity to work with clients on industry-transforming projects and initiatives and also work with bright and devoted Capco people. However, what has allowed me to thrive in the company is the support of our people. I will be forever grateful for the advice and guidance provided by my first line manager, who quickly recognised what I could offer to the company and to the client and took the time to teach me what success looks like. He and others that believed in my abilities became my mentors, a testament to Capco’s great inclusive culture. Without their valuable support, my journey to becoming a Senior Consultant and also a mother of two children would have been very difficult.

Changing careers and moving industries is never a decision that should be taken lightly. However, after five years with Capco, I can say that I have no regrets. 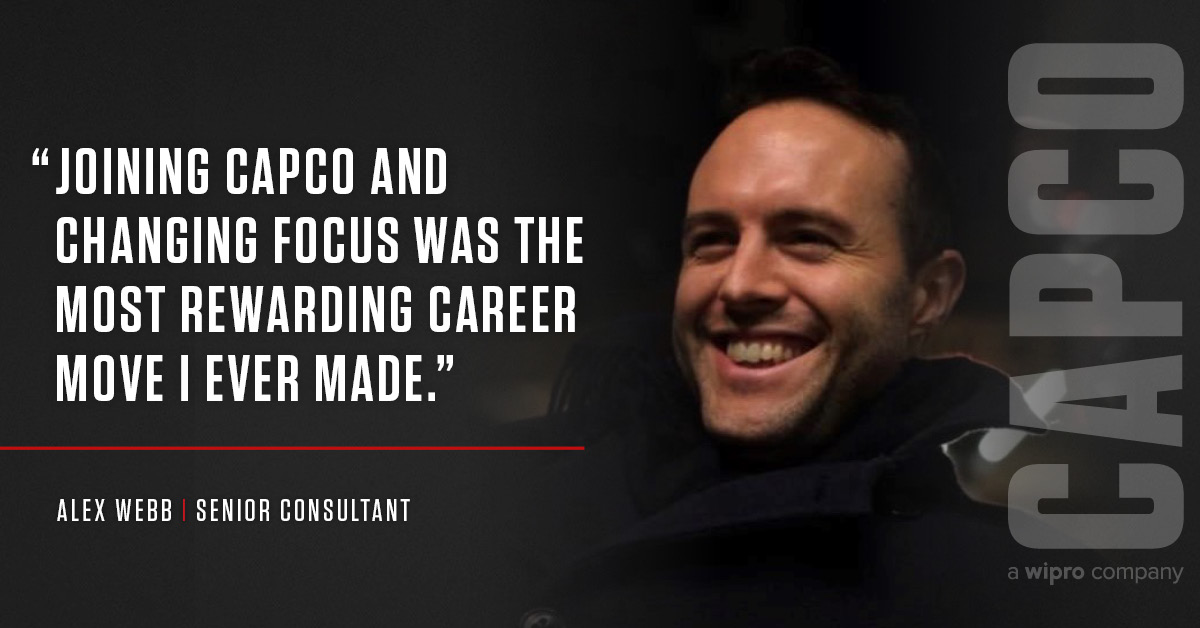 As an established management consultant, joining Capco and changing my focus from the public sector to financial services was the biggest and most rewarding career move I have ever made.

Prior to joining Capco, my inability to align my growing interests in cyber, capital markets and technology with my client work was driving me to search for firms that could offer these opportunities. After speaking with a friend from university who had joined Capco through the Armed Forces Network, I learned of Capco's proactive approach in seeking experienced consultants from diverse backgrounds. This approach alone was distinctive and impressive to me,  and was in stark contrast to many other top consultancies dismissing potential new hires with transferrable skills because they lacked experience in financial services.

Shortly after joining Capco, I landed in a high performing team within a capital markets client. It became evident that, although I was unfamiliar with some of the terminology, my previous consulting experiences and skillsets were highly relevant and transferrable. Structured account training, on the job training, and centrally scheduled training was also available to help boost my progress in closing knowledge gaps, with an overall ethos of providing support where needed while also encouraging ownership and accountability.

I am now approaching my fourth year with Capco, and I can say that a stand-out benefit of working at Capco is the depth of client relationships that are formed through our collaborative and hands on approach to delivery. Client accounts are cultivated as long-term relationships instead of tactical short-term engagements. This approach means that as client needs change over time, our offerings evolve to suit the strategy – providing a huge breadth of opportunity for roles and challenges to grow and develop skills, relationships and experience.

Overall, my journey with Capco has developed my consulting style, and accelerated my knowledge of financial services – and most importantly, it has helped me to apply past experience and transferrable skills to new challenges.
© Capco 2022, A Wipro Company